Saadia Al-Salahi – A Pioneer Costume Designer from Sudan: What Clothes Say about A Society 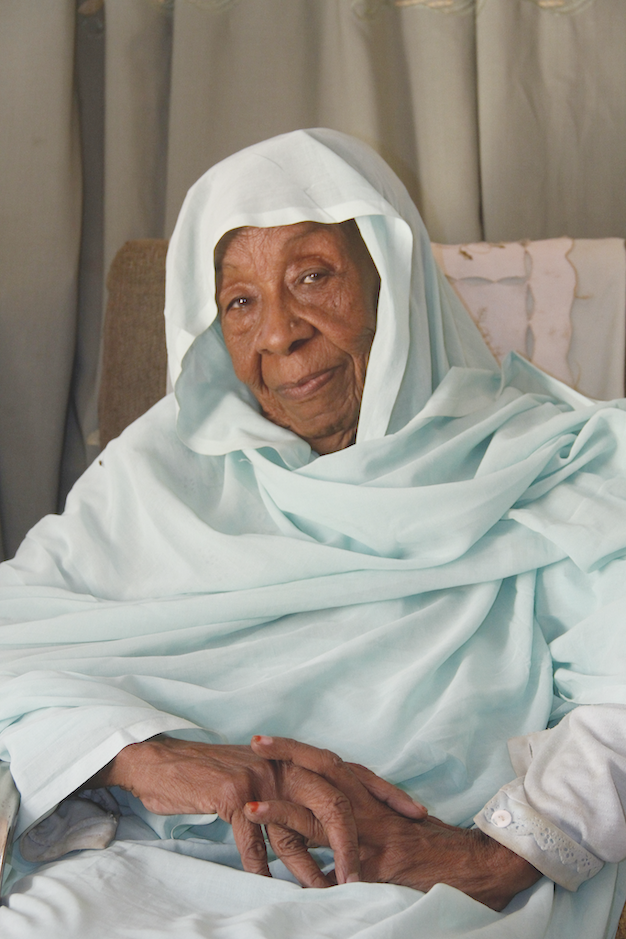 Born in 1941 in Omdurman, Sudan, Saadia Al-Salahi is a female artist whose career and pioneering work on Sudanese folklore and traditional costumes has inspired generations of artists. Her father, a respected sheikh and religious teacher, was a fine calligrapher who used to design and paint sharafa (tablets used for transcribing verses of the Quran).

Al-Salahi discovered her passion for art and costumes at an early age. When she was 3-years-old, she used to turn the sugar canes and pieces of cloth brought by her father into flutes and dresses for her dolls. When she entered primary school at the age of five and realised that she would not be making clothes for her toys anymore, she tried to run away. Her interests at that time mainly revolved around designing costumes for weddings and traditional events.

In the early 1960’s, Al-Salahi left Omdurman to study art in Cairo, Egypt. Starting in 1965, she attended the High Institute of Fine Arts where she studied design and decor with a particular focus on painting. She eventually returned to Sudan to attend the College of Fine and Applied Art and developed a strong interest in Sudanese folklore and costumes. In 1968, she joined the Sudanese Ministry of Culture and became the first Sudanese national to hold the position of Head Costume Designer.

Learning from the Past

Following her appointment at the Ministry of Culture, Al-Salahi spent two years roaming the museums of Sudan and studying the culture of old Sudanese Kingdoms. Based on detailed observations of ancient sculptures, she recreated some of the clothes worn by the inhabitants of the region centuries ago. As part of her research, she analysed how clothing and handicraft reflected societal power dynamics and demonstrated the influence of women in these ancient kingdoms.

Al-Salahi’s work has been careful to highlight the rich and diverse cultural heritage of Sudan. While the Indian sari (a garment consisting of a length of cotton or silk elaborately draped around the body, traditionally worn by women from South Asia) and Arab attire have both influenced clothing in Eastern Sudan, the African culture left a long-lasting imprint on the Western part of the country. In all her works, Al-Salahi has strived to emphasize the African nature of the Sudanese culture. As she describes, “The African hairstyle was widespread in Sudan. Even the Queen Amanitore, one of the most famous women of her time, used to wear her hair ‘the African way’.”[1]

Al-Salahi’s research also focuses on understanding the symbolic meaning associated with clothing colors. In the Sultanate of Darfur, for example, black was the color worn by the Sultan to welcome prominent guests, while red was associated with death and orange with adventure and hunting. In the Kingdom of Sennar, colors were crucial in determining one’s social status.[2] Sufi sheikhs, for example, use to wear green clothes, while common people would dress in blue.

While working for the Ministry of Culture, Al-Salahi adopted a hands-on approach. She toured throughout the country meeting with diverse communities in Sudan to document their everyday clothing, ceremonial costumes and traditions, and to collect numerous handicraft items. She wanted her work to reflect Sudan’s incredible cultural diversity and to tap into local knowledge and creativity. The path, however, was not always smooth. As she recalls, “One day, I was almost killed by a Beja man in Eastern Sudan. He was holding a knife and prevented the cameraman to enter the women’s room where I was taking pictures of a woman and Beja traditional objects.”[3]

In 1968, Al-Salahi became a member of the African Designers Society. She started a close collaboration with the well-known female artist, Kamala Ibrahim Ishaq. Both artists actively encouraged the participation of women in art, organising trainings and exhibitions in schools across the country. Al-Salahi was dedicated to understanding the challenges faced by Sudanese women and finding solutions to improve their lives. After she realised that the traditional thoub (a long piece of fabric which wraps around the body) was impractical for women using public transportation and working in factories and hospitals, she developed an adapted design of the dress that would facilitate women’s movement while still covering their body.

In her career, Al-Salahi participated in many exhibitions and received several national and international awards. She retired in 2010 but is still, at 75-years-old, a vocal and tireless advocate for the promotion of Sudanese folklore and traditional costumes. As noted by Al-Salahi, it is important to recognize the global dimensions of clothing design, while also maintaining local originality.

Amani Mohammed El Obeid holds a PhD in Political Science. She is a researcher and Assistant Professor whose work focuses on Islamic thought from an enlightened perspective. She works for the Ahfad University for Women (Ombdurman) and the Centre d’Etudes et Documentation Economiques, Juridiques, et Sociales – CEDEJ (Khartoum). Amani has a strong interest in Gender and Islam and has published several articles and booklets on this topic with Sudan Political Chronicle and Egypte Monde Arabe.

This article is based on an interview Amani El Obeid conducted with Saadia Al-Salahi in Omdurman, Sudan on October 29, 2016.

[1] Nubian Kandake (queen) of the ancient Kushitic Kingdom of Meroë.

[2] A Sultanate that ruled a substantial area of northeast Africa from the 16th to the 19th centuries.

[3] An ethnic group inhabiting Sudan as well as parts of Eritrea and Egypt.